“In order to liberate myself from the past, I have to reconstruct it, to wonder about it…and get rid of it through making (art); I am able to forget about it afterwards. I have paid my debt to the past and I am liberated.” Louise Bourgeois

Drawing is traditionally a preliminary practice yet by using drawing materials my work becomes a method of working back into a personal and collective past, opening it up to questions in order to discover what might have been overlooked.  Conte crayon, charcoal, ink, pencil, eraser and acrylic paint are used expressively as I search beneath the surface of historical narrative.  Artworks are distressed through various means to explore rich textural possibilities of medium; I bring a tactile reality to images sourced from historical photos  so that the past is symbolically embodied in the present.

My father and mother fell in love well after the Second World War yet their marriage never emerged from its shadow. My German born father had fought on the Eastern Front, and my Dutch mother had suffered with her first young family during the occupation of Holland. Wanting to leave the memory of war behind and start afresh they traveled with me as a baby and my older siblings to Australia. Like many immigrant families their goal was to concentrate on the future, but for my family, the past broke into our new life in the form of my father’s battlefield flashbacks. As a girl I was deeply frightened, and developed a form of traumatic amnesia which lifted only ten years ago.

As I gave expression to grief about the War and the Holocaust I began to look at the history of the Second World War as a daughter seeking her roots. I became aware of how little I knew – not only about  military experience, but of  stories of civilian tragedy with their situational complexity.

In my recent work, I give attention to the experience of women and children in wartime Germany, one of whom was my grandmother.  I wonder how long children will be required to pay the price of adult failure and violence. Children remind us that  even in the midst of darkness there exists light, love, goodness and innocence. By focusing on how mothers and children were affected by aerial bombing I cannot help but make historical connection to the compassion many Germans are demonstrating toward the plight of children and their families fleeing Syria today. 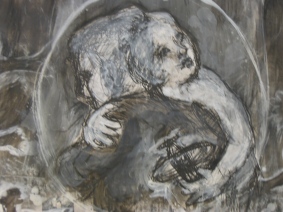