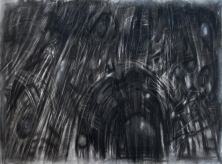 view of the grotto

“the complex relationship between ethics and aesthetics” 30×22″ charcoal, conte, eraser on stonehenge.

Wartime narratives are dominated by a masculine and military perspective. Understanding the experiences of women and children make ideas which are often used to explain and justify war: concepts of good and evil, guilt and innocence, aggressor and defender, lose their validity. We are not accustomed to looking at an enemy society with compassion, yet when we consider children it is difficult not to do so. My work in response to Second World War bombing campaigns focuses on the tragedy of mothers and children bearing the cost of man-made war and resonates with the continued use of aerial attacks on homes and civilians today.

The Other Side of War was a solo exhibition that combined small figurative and portrait  drawings with larger works from the Ruins and Little Saints series. It was shown at the Fifty Fifty Arts Collective, 2516 Douglas St, Victoria, BC, Canada from March 10th to April 9th 2017.